Earnings calendar for the week of February 8


With fresh hopes of economic recovery emerging after the Senate moved closer to passing the $1.9 trillion stimulus package, stock futures are probably headed for one of their best phases.

After slipping from last month’s record highs, the S&P 500 index bounced back and hovered near the peak, gaining more than 3% this week. The Dow Jones Industrial Average crossed the 31,000-mark once again, taking a cue from the uptrend the broad market is witnessing.

Activision Blizzard (ATVI): Three reasons why this stock deserves to be on your radar

Adding to the positive sentiment, initial jobless claims dropped to about 779,000 last week, which is better than the number economists had predicted. Though the employment index dropped to the lowest level in about two months, it remains at historically high levels.

The job market owes the recent improvement mainly to the decline in new confirmed coronavirus infections. The current level of hiring looks inadequate to ease the strain on the system, but the situation is expected to improve as the vaccination drive picks up pace.

Google parent Alphabet and e-commerce behemoth Amazon was in the spotlight at the beginning of the week, with both reporting blockbuster results for the most recent quarter.

Amazon’s quarterly revenue crossed the $100-billion mark for the first time, while a rebound in advertising lifted Alphabet’s top-line to a record high. The other major firms that reported earnings on Tuesday, the second day of the month, were China-based Alibaba Group, United Parcel Service and Electronic Arts.

The earnings scene cooled off since then, with the only important announcements being those of Biogen, Qualcomm and PayPal, which published their quarterly numbers on Wednesday. On Friday, Ford Motor Company reported positive earnings for its fourth quarter, defying analysts’ estimates for a loss.

The number of big companies reporting next week is fewer. After a soft start, Tuesday will see network-gear maker Cisco unveiling its second-quarter numbers. Coca-Cola and General Motors are preparing to publish fourth-quarter data on February 10, while Walt Disney is scheduled to report on February 11. 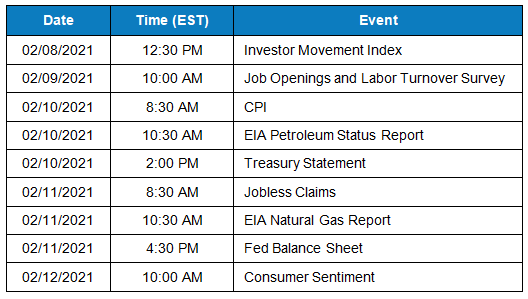 The positive effects of digitalization and e-commerce growth on China’s financial services industry became more pronounced during the pandemic...

Activision Blizzard (ATVI): Three reasons why this stock deserves to be on your radar

Shares of Activision Blizzard Inc. (NASDAQ: ATVI) were up 1.6% on Thursday. The stock has dropped 14% since the...

Credit: agrobacter on iStockHow do you see the future of mobile gaming revenues – is it going to be...

Is Crocs (NASDAQ: CROX) stock still a buy after the massive rally?

While throwing markets into disarray, the widespread shutdown also had a positive effect on industries like retail and technology,...

Oracle Corporation (NYSE: ORCL) has successfully transformed from a software company into a cloud service provider, but there are...

Smashing crypto adoption barrier? Solana aims to do its own ‘thing’

Smashing crypto adoption barrier? Solana aims to do its own ‘thing’