Earnings calendar for the week of February 22


Market sentiment continues to be centered around the government’s stimulus package, which is expected to be finalized late next week after the recent revision. Though an unexpected rise in weekly jobless claims weighed on major stock indexes, the proposal for a bigger stimulus offset most of the impact.

Latest data from the Labor Department showed jobless claims rose to 861,000, defying economists’ prediction for a decline. The S&P 500 index pulled back after rallying early this week but regained strength in recent sessions. The Dow Jones Industrial Average was up 54 points early Friday.

Amazon was in the spotlight mid-week after the e-commerce giant revealed plans to add Australia-based tech start-up Selz to its fold, in what could be a move to tackle the growing competition from Shopify.

In another tech deal, Crowdstrike clinched a deal to take over data analysis start up Humio for $400 million. Meanwhile, paint manufacturer Sherwin-Williams has reached the final stages of selling its subsidiary Wattyl to coatings company Hempel.

Drug store chain CVS Health was among the first to publish results in the holiday-shortened week, reporting a decline in earnings. On Wednesday, Baidu, nicknamed the Google of China, reported mixed results for the final three months of 2020. The other important firms to have reported on that day include Shopify and Analog Devices.

Video streaming platform Roku brought cheer to shareholders Thursday by reporting profit for the second consecutive quarter, probably ending a prolonged losing streak. Meanwhile, it was a rather disappointing show from Walmart, which released weaker-than expected earnings in the pre-market hours.

Wall Street is headed for another week of subdued activity on the earnings front. After beating the market’s estimates consistently in recent quarters, supported by the rapidly growing gamin segment, Nvidia will be reporting financial results on February 24. The other major announcements are expected from Autodesk, Bestbuy, and Monster Beverages – scheduled to release earnings on February 25. 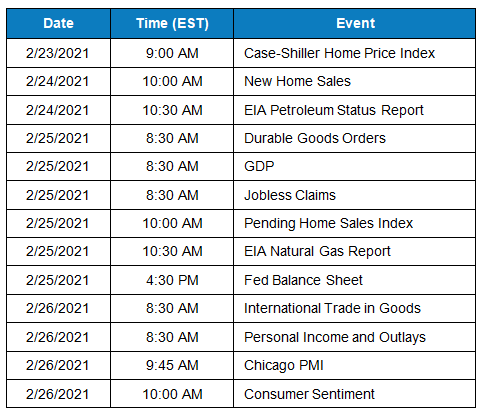 After bringing the global economy to a grinding halt, the coronavirus pandemic is subsiding in most regions, thanks to...

Shares of Activision Blizzard Inc. (NASDAQ: ATVI) have gained over 37% in the past 12 months and 5% since...

Ethereum’s $1.5B options expiry on June 25 will be a make-or-break moment

Ethereum’s $1.5B options expiry on June 25 will be a make-or-break moment